Removing something from game? 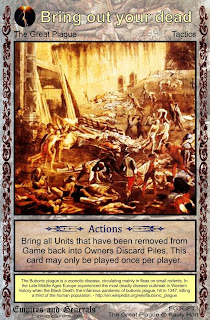 Didn't I just do that with the discard pile?

Yes. Typically. But let's say that you are fighting the Vikings and they are looting the graves for bodies they can lash to their ship as a shield. What if you just moved those bodies before they got their? That would help a little in the long run. Removing something from play means that it is pretty far away or hidden so well that it cannot be accessed by the game at hand, by you or by your opponent.

The Great Plague Expansion has a couple of cards that mess with Discard vs. Remove from Game / Remove from Play. For instance, you can already have a big pile of plague-dead sitting in your discard pile and start removing them from the game so they don't spread the plague any further and you don't want someone to play A Field of Rotten Corpses and stink up the place... but then someone calls Bring Out Your Dead and all of your work was for nothing. I guess you will have to start over.

Remove from Play - Taking a card a step further from Discarding involves removing that card from play. It usually means that this card is over and done with for the remainder of the game and cannot be affected by discard issues.
Posted by Pauly Hart