Laughing in the face of History - Cameleopard 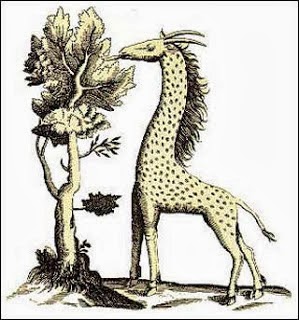 The giraffe got its name from the Arabian word Xirapha, which means "Swift walker"

But to the Romans and Greeks, the giraffe was camelopardalis: part camel, part leopard.

"There are two other animals, which have some resemblance to the camel. One of these is called, by the Ethiopians, the nabun. It has a neck like that of the horse, feet and legs like those of the ox, a head like that of the camel, and is covered with white spots upon a red ground ; from which peculiarities it has been called the cameleopard. It was first seen at Borne in the Circensian games held by Caesar, the Dictator. Since that time too, it has been occasionally seen."

They could have borrowed words from other african languages. Like Zulu: "Indlulamethi" or Swahili: "Twiga".
Today it's name is still "Giraffa camelopardalis", even though it's been proven beyond any shadow of any doubt that it is NOT a camel, and NOT a leopard.