So I did, but after watching the movie and all the great actors that were in it, I decided to join the amalgam of the Joke series with an actual working card.

It's a fun card but kind of annoying, so I was hesitant to throw it into the mix for real, I might later though. Each card below, you will find does have the exact same stats and ID number, so I am quite sure that someone will have Ricardo Montalban in their deck only to find someone else plays Slim Pickens or Richard Crenna first.

So, if you agree that you are using the joke cards, feel free to use The Deserter, but it is not part of the Family Edition.

I went about taking screenshots of the movie, but then I decided that I would just scour the interwebs for the actors most memorable (in my mind) roles and used those pictures.

Oddly, and inadvertently I seem to have tied in The Star Trek Franchise as well as the Braveheart movie. This was by accident I assure you.

You will find a film overview of the film below the cards. The movie is highly presumptuous but there are some historical redeeming qualities. It's a rare gem among spaghetti westerns and all you are really missing is Clint Eastwood and/or John Wayne.

So, just to recap:

This is a (These are) Joke Card(s).
It is possible to play if you agree on it before game.
The Deserter is a Spaghetti Western.
These are the actors in The Deserter in some of their other famous roles.
I do not mean to keep making Star Trek/Braveheart Cards on purpose.
Dino was the Producer.
Dino is dead.
Dino produced some pretty awesome movies.
Dino produced "Manhunter" the first Hannibal Lector movie in 1986 who starred Brian Cox as Hannibal instead of Anthony Hopkins. Brian Cox later went on to play Uncle Argyle in Braveheart. DANGIT! 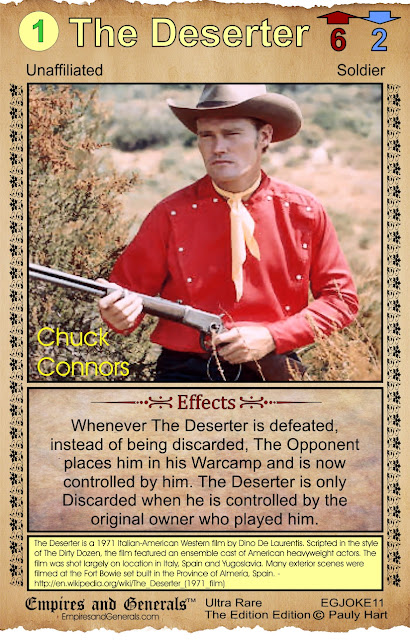 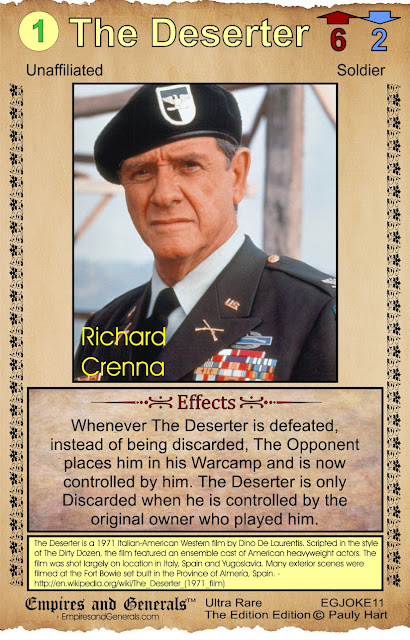 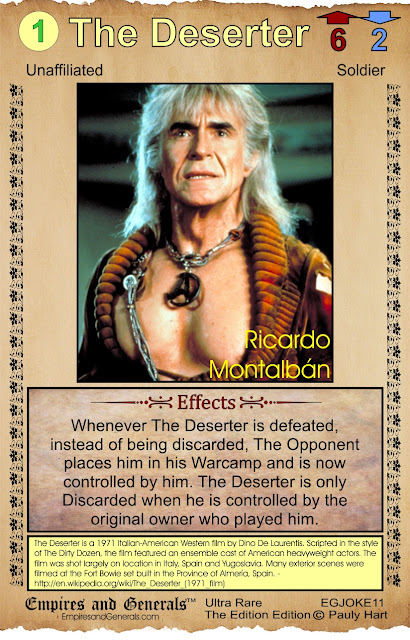 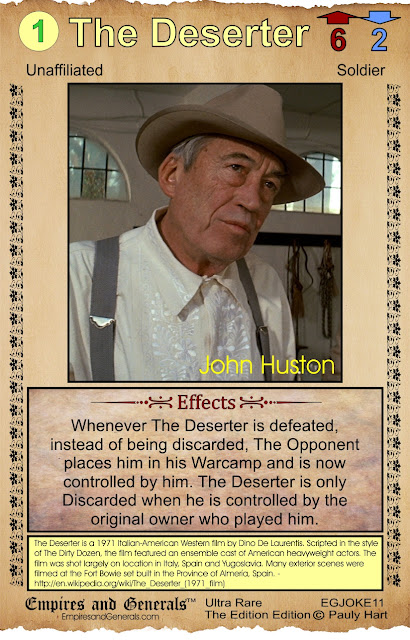 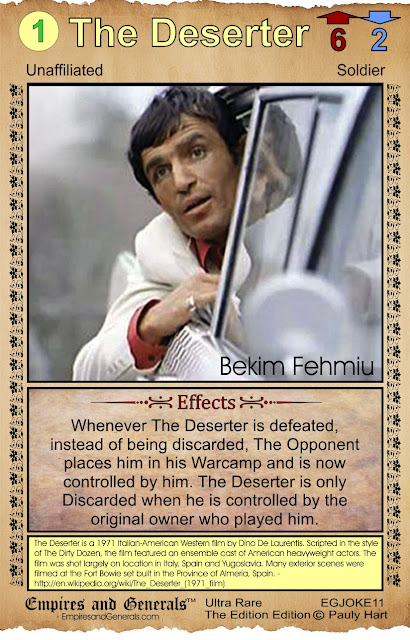 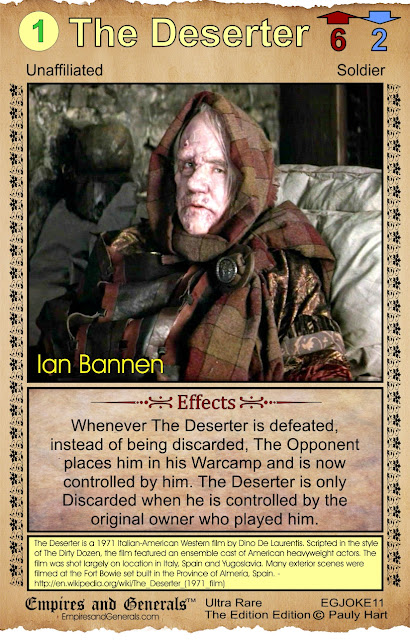 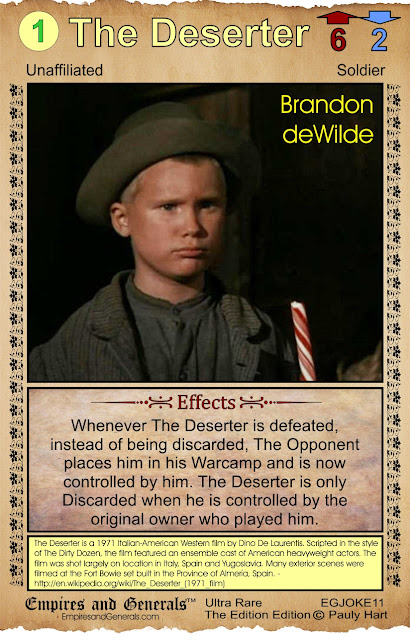 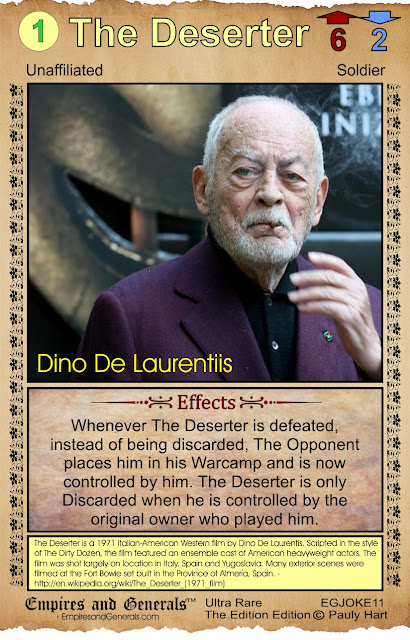 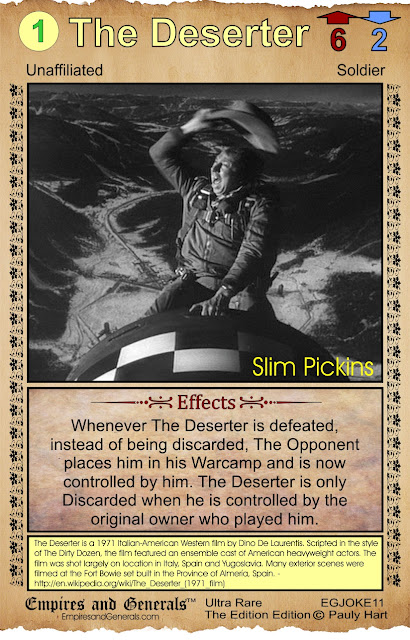 When Hollywood went to Almeria to shoot Italianate American westerns, the Italians, ironically, started looking at Hollywood for new inspiration. Directed by a Hollywood veteran, starring a variety of stalwarts from Hollywood westerns, but produced by Dino De Laurentiis, and shot in Italy, Yugoslavia and Spain, The Deserter almost feels like a compromise movie. It’s part revenge movie, part men-with-a-mission movie, a sort of spaghetti western meets Major Dundee meetsThe Dirty Dozen. What sets it apart among the bulk of Indian westerns made in the late sixties and early seventies (both in Europe and the US), is the total lack of understanding of the awkward situation of the red man. The Indians are not shown as victims of the white man’s greed or thoughtlessness, nor are their cruelties excused, or merely explained, by similar acts of the other side. They are simply shown as an obstacle, as a threat to civilization that must be neutralized with a pre-emptive strike. “If we don’t attack them, we’ll all get killed.”

In the opening scene, a young cavalry officer, Victor Kaleb, finds his woman in agony: she has been skinned alive by the Apaches. To save her from further sufferings, he ends her life with a bullet from his own gun. Kaleb blames the army for not protecting the outpost where she was tortured, so he becomes a deserter and an avenger. Dressed like an Indian, he stalks the Apaches and shoots them without warning. The non-conformist general Miles thinks Kaleb is the ideal leader of an illegal search-and-destroy mission across the border, against the Apache stronghold defended by chief Durango and his marauding troops. Kaleb accepts the general’s offer because he presumes the mission will offer him the chance to kill all Apaches …

Set on both sides of the border, with the American commander organizing an illegal search-and-destroy party (‘to avoid worse’) because the rules of engagement prevent him from starting an official military campaign, the equations with the Vietnam war seem obvious. Most probably the reactionary overtones were the main reason for the lukewarm reception of the movie, both in Europe and in the US. Political incorrectness anno 1970. Note that the Italian title, La Spina Dorsale del Diavolo, the Devil’s Backbone, refers to the base of the Apaches in the mountains, south of the border. Note also that Al-Qa’eda means base. It’s of course purely coincidental, just like Fehmiu’s red bandana, that makes him look like Rambo, but it will be clear that the film has aged quite well. Some will even say it was far ahead of its time…


Serbian actor Fehmiu had risen to stardom in his home country before Dino the Laurentiis cast him, in 1968, as Odysseus in a successful four part mini-series. It was his second appearance in a major international production, following the disastrous The Adventurers (1970, Lewis Gilbert). Most contemporary critics called his performance wooden, probably because many of them were still rather unfamiliar with the typical unflinching spaghetti western anti-hero (unless he was played by Clint Eastwood or Charles Bronson). To me his performance seems spot-on. Fehmiu is seconded by a motley crew of familiar faces, such as (among many others) Slim Pickens, Richard Crenna and John Huston. Some of them had made their appearance in one or more spaghetti westerns, most notably Woody Strode and Chuck Connors, while Huston had directed a bible movie (the book was definitely better) for De Laurentiis a few years earlier. Surprise appearances are made by Patrick ‘son of’ Wayne and Brandon de Wilde, once the young boy from Shane, here an adult with chubby cheeks. Ian Bannon has a nice cameo as a British observer, who’s making a report for her Majesty the Queen (he seems a late descendant of the comic-relief character Lord Castlepool from the Karl May movies). The Indians are played by either Latin-Americans (Montalban) or Italians (Palmara). Somehow it seems to make sense. We're in Europe, so they are the natives.

I watched the film with low expectations, and was pleasantly surprised. It's violent and a bit nasty, the way most of us like their westerns. Somehow those reactionary overtones are refreshing. The first half hour is particularly strong; afterwards – as soon as the ‘mission part’ starts – it falls into a more familiar and predictable pattern, but it remains entertaining throughout. Kennedy’s direction is more than adequate, still you ask yourself what a Peckinpah or an Aldrich would’ve done with this material. They probably would have developed some of the characters better – and skipped others. Especially Conners’ Father Dynamite (a chaplain who is at the same time an explosives expert) is unnecessary gear for an already overloaded script. Fairly good use has been made of the locations, especially those in Spain. For the movie a fort, ‘Fort Bowie’ was built, that was used again several times afterwards (1). The finale, the eventual attack on the Devil’s Backbone, is a bit of a letdown. It feels rushed and is set at night, probably to detract viewers’ attention from a few unrealistic sets. According to Mimo Palmara, the sequence was filmed in Rome, in the De Laurentiis studios, during the terribly cold December month of ’69 (2). Palmera played Chief Durango with a naked upper body. This was definitely not a pro-Indian western.(3)

How to watch it – There’s no DVD available apart from an Australian R4 DVD, which is said to be fullscreen and of poor picture quality. There’s a Dutch VHS release by Esselte CIC Video. Image quality is good, but fullscreen. The cassette was also released, with similar cover design, in several Scandivanian countries. I watched a fandub version, created by hocico for cinemageddon. It’s in about 2,20:1. It’s far from great, but it’s watchable, and it seems to be the only widescreen version available. -