So I am redoing the cards for the Unaffiliated and I realized that since the Gauls were part of the larger Celts, I would just a Gaulic Tribe and focus on them for a minute. Then, during research, I realized that I haven't done anything with the Druids yet. I know that I am still in the Ancient Epochs with the rest of the Family Edition, but on the Unaffiliated peoples I have taken some liberty.

So here is a Druid. He replaces "Gaul Wildmen" which became "Celtic Barbarian"... Kinda.

Now, rather than giving him supernatural powers or anything and throwing him in the Specialty Edition, I've kept him here and dialed his myth down a bit. And you could suppose that there would be a scientific way to put into practice animal sacrifice. Possibly a psychosomatic effect upon the viewer. Now here we have (in this card at least) a Druid who's animal handling skills are almost awesome.

And since I really haven't brought Tigers (Maurya) or Elephants (Carthage) into the game yet, and I haven't renamed the Sub-Genre on the animal cards, all you really have to work with is:

But that's ok because let's say that you built a "Rhino-Resource" Deck. It will be pretty beefy when I finally get to the Elephants. Just to make it spicy I will add some Wranglers in there as well and you can have a zoo. 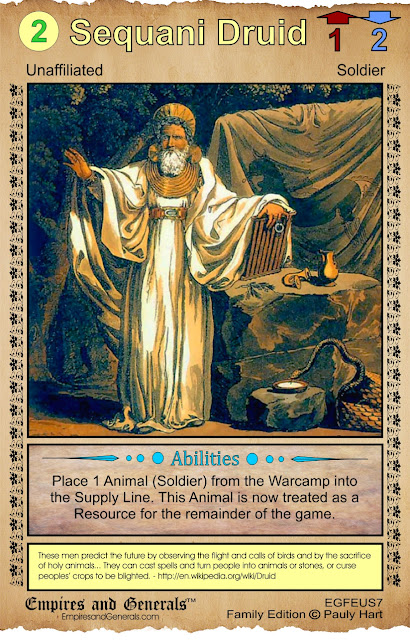