Laughing in the face of history - The Banning of the Fez 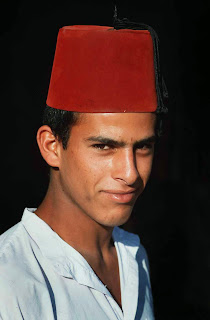 The fez originated from the city of Fes in Ancient Morocco.

For quite some time there was a stranglehold on the berry that made the dye to make the color.

No idiot figured out how to make that color without these berries.

In 980 some bullshit happened and all the Moors living west of The Nile were told to go to Fes instead of Mecca.

So all the homies were like: "Aww yeah, let's go hang out in Fez."

And some tourist dude noticed some local dude with a bright red can on is head and was like: "Hey, that thing on that looks pretty fly for a white guy."

And they were like: "Yo G, what you got on your head?"

And he was all like: "Ah yes, my family wears these. It's a sign of intelligence. Plus, I don't bump my turbine when I pray."

Fast forward to the end of the Ottoman Empire and the dawn of the new Turkey (obviously in Turkey)...

Kemal Ataturk, leader of the Young Turks, felt the fez was backward and dressed only in western, notably British, suits and styles.

On August 30, 1925 he banned the fez in an attempt to push Turkey into the "modern world".

This effort was resisted with some fury, to the point that several riots broke out and fezzes were seized as illegal contraband.

Yes. a HAT was illegal.

By the 1930s the fez was almost gone in Turkey when one last attempt was made to re-introduce it by a group who planned to overthrow Ataturk.

This ended in deadly results with a total of some nine people shot down the streets of Omelette, Turkey.

The headline bit is the only thing that I made up.
Posted by Pauly Hart