i hope you are enjoying the new layout and the new card. i'll bet it proves interesting in many games.

i also hope you had a great Christ-mass, and whatever else you celebrate this solstice.

funny thing reading the hits on the site.

apparently all of you were bored on Christmas day and decided to visit but were busy on Boxing day.

ok well i have had a bit of a SNAAAAAAAAG on the greeks, to say the least.

upon heavy study into the lifestyle of the average greeks i have come to conclusion that there IS not an average classical greek.

i have found there are basically two camps.

a) the pasty robed philosopher
b) this is sparta

this seems the best thing to do.

instead of fracturing the whole of the empire/civilization into tiny brackets that would demolish other empires and not be fair to the game as a whole, i have tempered/tweeked the entirety of the game itself.

i will be publishing 2 (two) groupings of leaders (up until this time known as generals).

a) generals
b) philosophers

this does not change ANYTHING within the game PLAY. the main difference will be when you receive or draw a "General" card it may say "Philosopher" instead.this will lead to a new revolution in deck building.

this will also lead to a nice little protection bracket from attacking cards that might say something to the effect of: "discard or beat up or decimate opponents general in play".

which is nice if you are playing the greeks.

i believe that i will publish the deck as follows:

4 generals
4 philosophers
10 soldiers
the rest should be the same.

this will lead the way in advancing the game in diversity for more fun gameplay.

i hope to iron out the wrinkles soon with my total build before i create the whole of the cards.

once i am done with card production, there will be an invitation sent out to view the private blog. send a request to empiresandgenerals@gmail.com

i will be releasing the unaffiliated booster cards in their new and improved format soon publicly, for free, a little bit at a time, when i get nuts from trying to figure the greeks out i will work on card design this will improve gameplay and player happiness.

i am going to invent and create an expansion set called: "Classical Navy" and include a smattering of each empire and their watery ways. just seems fair that this game be not all "land lubber" and such.
Posted by Pauly Hart 0 comments

here is an excerpt from the forums/

you can go to them here

lol i just saw your signature.

let me start with saying that i totally see the argument here. in a face-to-face war, yes. totally. but let me take a minute to explore it more fully.

remember, primitive egyptians built pyramids with the technology that they have and we can't figure out how to do it.

but on the other note, the main mechanic for the game as a limiter is this: if an arrow can kill a person in cloth armor (think an item with the ability to do 1 damage attacking a unit with an base value of 1), and a plasma grenade can kill a person in metal armor (same formula).

when you place the two together you have to take into account that of COURSE the plasma grenade will do the damage far more than the damage of the arrow.

but for now, for the sake of mechanics it will be 1 to 1 ratio.

but you have a valid point. for the sake of argument, we will probably add things like "sand traps" for egyptians that make a unit with a health higher than 15 unable to leave the war camp...

things that guerrilla warfare suggests would definitely be a boon to the low-tech army.

think about this: when the united states invaded vietnam we had superior EVERYTHING when it came to the items that we brought with us, but we didn't know the lay of the land and how to utilize it to our advantage. the united states lost that war and are ashamed of it. but the same thing happened when the brittish redcoats tried to put down the colonial rebellion. the french, colonialists, and native tribes slaughtered them because they didn't "fight fair"...

even in science fiction, we see this once (and i actually am a fan of the movie but they should have never made any more). starship troopers. the so-called "heros" came in to squash a bunch of bugs but were sorely mistaken as to what they had gotten into.

and those were creatures with NO technological advances that lived in holes in the ground.

so, there is a lot of tweaking you can do. aside from death stars and neutrino bombs it should be a fair fight.

something to think about.

Hope you enjoy the new look.

Have a warm winter!

Greece Deck on it's way soon! 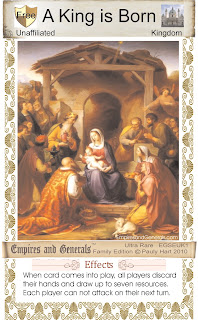 thing that i leave out of my game

people ask me about various subjects in history and why they are not included in my game.

there are several reasons.

let us take sexuality for example. sexuality is something that i have decided will NOT be in the game of empires and generals.

here is a prime example of things that i have learned that, albeit quite intriguing, really wouldn't be helpful in gameplay.

when and if greek spartan boys finished the agoge, they were given a mentor. an older man of around 35 years.

someone to teach them the art of war, train them to fight in the phalanx, help them learn customs and traditions, as a dancing partner... and as a practice sex partner.

they stayed with them from age 13ish to 30ish... learning all these things.

when it was time for the spartan citizen soldier male to wed at the age of 30, their wife, age 12, had her head shaved, placed in boys clothes, and placed in a dark room.

the man, after much drinking would go in and "meet" with her.

this happened night after night until they eventually settled down together.

but right at about the same time the man had gotten used to the new "lover"... or maybe right at the time where he had gotten tired of a vagina and breasts... he was given his own boy to mentor... fresh from the agoge.

a little boy to teach all the way that he had learned when he himself was a teenager.

and that's just one city in the entire world in one brief period of history.
Posted by Pauly Hart 0 comments

empires and generals is now purchasable.

let all with american dollars rejoice.

now... send them to me and receive +1 dexterity on all critical hits... AND empires and generals cards.

this week besides working on getting LIFE organized, i worked on some marketing needs.

also tweaking the card layout (for the BETTER). no one will have any complaints... promise.

ALSO the greeks are next deck scheduled.

greeks generals may or may not include: pericles, xenophon, leonidas, draco, achillies, heracles.

i might save the last two for the greek myth deck later.

where else could i make atlantis or geatland  or norse or hindu decks but in the myth series?

empires and generals has BIG ideas.

Are you an artist?

Do you dream of becoming one?

Do you want international notoriety?

Submit some original artwork to Empiresandgenerals@gmail.com

Tell us what card it is for!

We will put it on a card and put it online!

(No pornography or inappropriate drawings or photos.)
Posted by Pauly Hart 0 comments

Printing Instructions have been updated to include helpful pictures.
Posted by Pauly Hart 0 comments