The Prince Strategy - The Nobles and The People 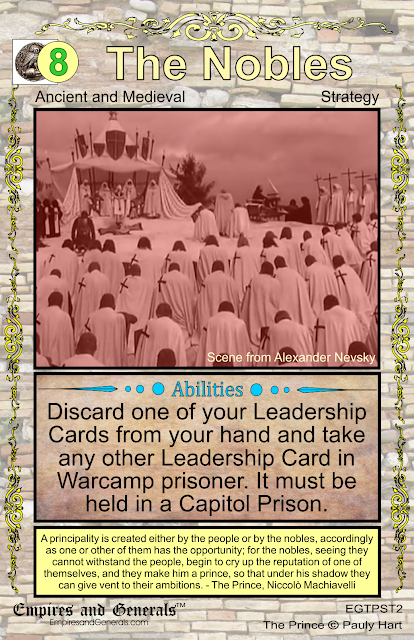 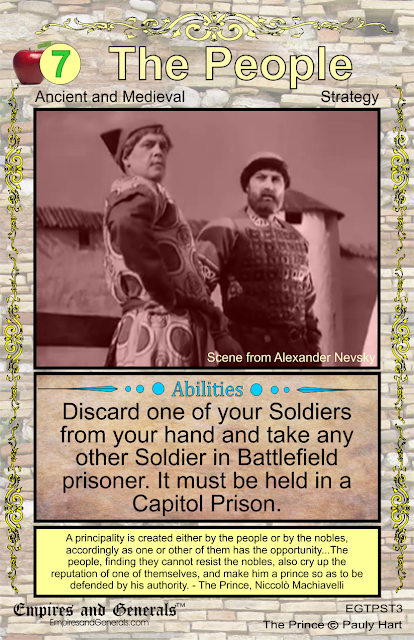 Submitted for your approval a slight expansion for those of you would would like it.

Imagine if you will, before the game starts, being able to already have seven cards on the table in play.

Already having seven cards in play.

There are several loopholes and catches to this and when you see that there is no Harvest Phase, no Attack Phase and you may not play Tactics cards you might not see how it is beneficial at all.

These are there for a purpose however. Because you are not "playing" yet, there can be no interaction per se.

The Glossary has been changed to reflect it thus:

So, in the course of the turn, the interaction will be limited to are the following:

By having seven cards available at the beginning of the game, and then being able to draw eight more immediately you are increasing the speed at which you can create a unique and powerful army.

I have played over a hundred games of Empires and Generals. Mostly it has been with new people. But lately I have been playing with experienced players and have found that we are both full of anticipation at the very beginning of the game.

Let me express again, that this is an OPTIONAL item to add if you would like it.

This will solve that anticipation with immediate action. Enjoy. 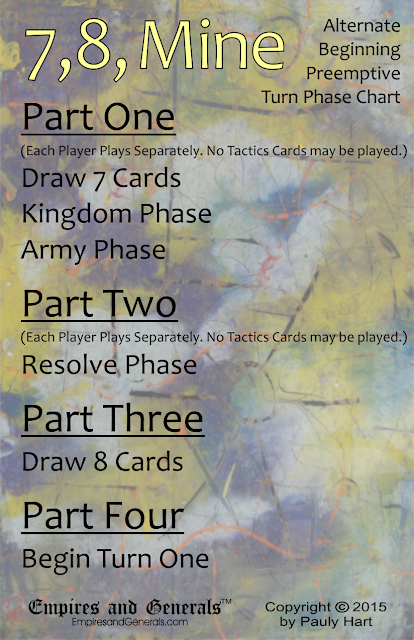 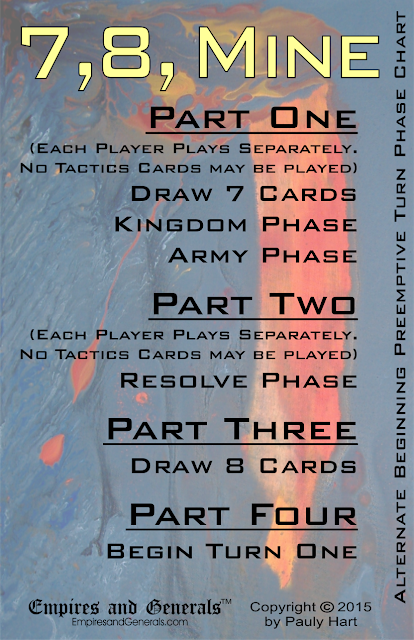 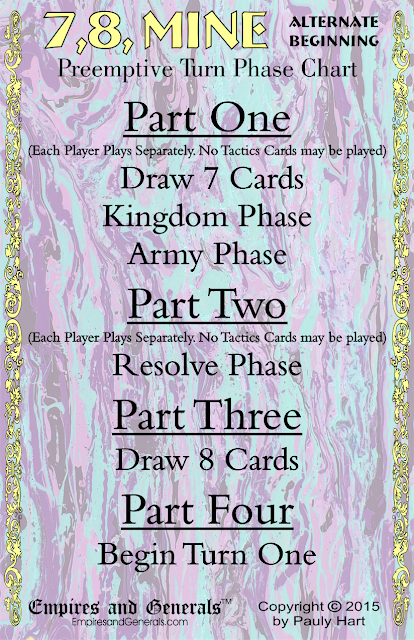 Two and a half points is aaaaaaalmost a win. 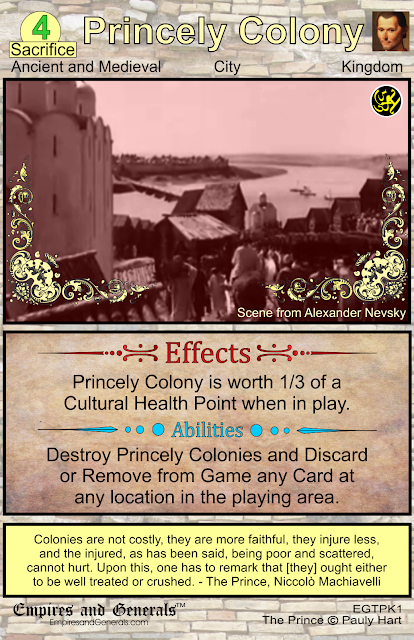 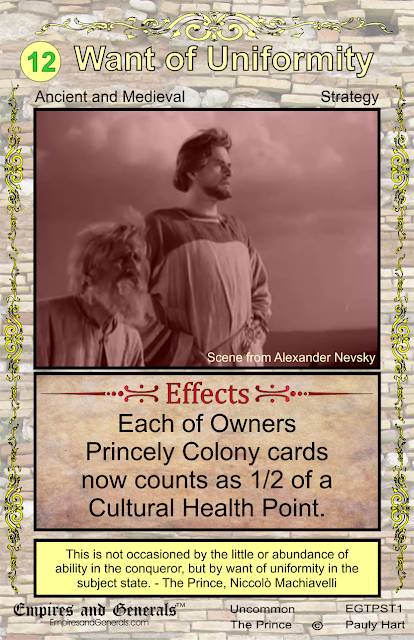 I was going to make an Apache Warrior card called "Black Knife".

I made this instead. Black Knife will have his day.

Please share this map wherever there is free space on the Internet. 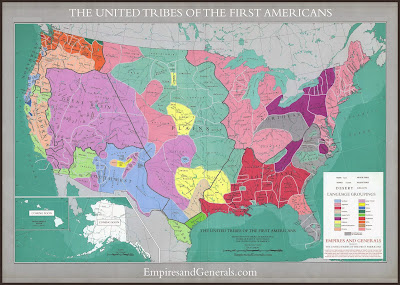 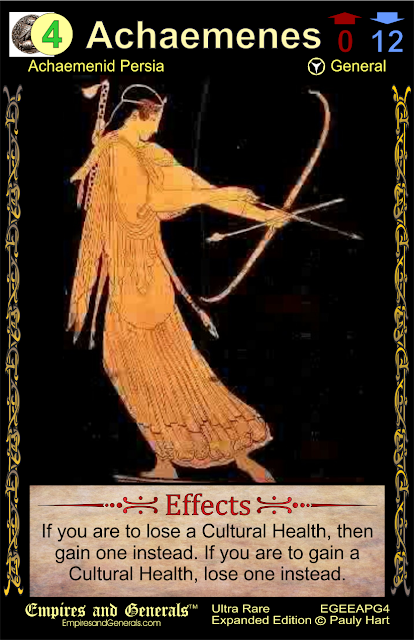 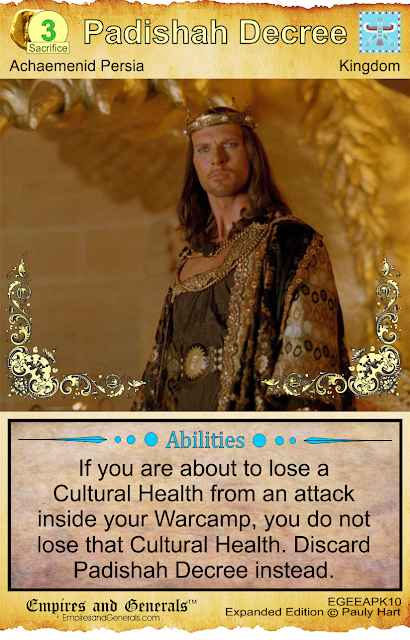 A Very interesting Article From HERE

Do you like Geography as much as you like the History subject? If yes, then you got both interesting subjects worthy of reading and analyzing. Do you know that these two subjects are very much connected or related to each other? Geography makes history and vice versa. But many people are a little confuse about the exact reason about this. Actually, geography has a greater impact to history than history to geography. So, by magnifying how this could happen, it will not be difficult to understand both things. So, to clear things up, this post will scrutinize some points to remember in order to answer and evaluate why geography affects history. 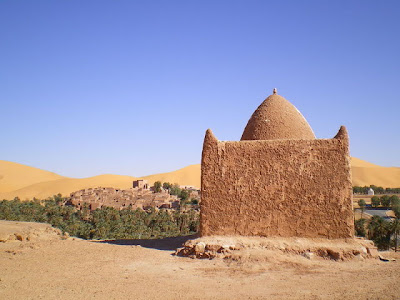 Geography is about the physical features of the earth. It is vast in nature. First the earth is sphere in shape and that it revolves around the sun. That movement caused different seasons of countries. Second are the physical features of the earth. The plains, sea, mountains, hills, valley, rivers, falls, lakes, trench, islands, gulf, isthmus, etc. are just like in one group. Then the climate and seasons enter again. Climate and season can be related to each other; however there’s difference between them. Seasons are caused when the earth is moving through its axis to revolve around the sun. While the earth is rotating, some parts of it are not directly hit by the rays of the sunlight especially those countries which are near in the north and South Pole. But those countries which are in the equator or near to it, they receive most of the sunlight throughout the year. And that’s why they are called tropical countries.

So, the SEASONS and the PHYSICAL FEATURES of the earth are the main factors that affect the entire story of the human race (history) in terms of geography.

Basically, the physical features and the season can unknowingly affect the way people will live in a particular place. How? One best example is through the AVAILABILITY of RESOURCES.

If a country has a lot of resources, then people are expected to live in abundance. However, that notion is not true for always. People can view things differently due to several factors. Now climate could be one of those factors. A cold and a hot climate might have different effects to human beings. Thus, different thinking, culture and way of life can happen.

But in short, the environment, features in the environment, natural resources and the climate can mold human beings into different kinds of thinking, culture, way of life, emotions, dreams, outlook, behavior, etc.

That’s the main answer of the question why geography affects history.

Now to magnify that, here are some questions that would tickle your mind.

1.Have you observed that most of the THIRD WORLD COUNTRIES are located in the TROPICAL COUNTRIES?

2. Have you observed that these countries were almost COLONIES before of the Western Countries?

I Is there any geographical explanation why these countries situated mostly in the equator have almost the same fate economically and historically?

Actually, there is a kind of Tropical Geography. It was already noted even during colonization times that people from the tropical countries were primitive and a little late in terms of development or progress. Thus, they were colonized easily by the European colonizers. So, this scenario is contradictory to the beautiful climate of these countries that brings rich resources.

So, how Geography will be connected to this issue? The following could be the answers:

1. People from these countries were probably enjoying the beauty and the abundance of their countries. They tend to be more relaxed and calm because they’ve got nice climate with good resources. They did not find different ways on how to make life better because they felt complete.

2. But the western coming from countries with four seasons, they felt the need to prepare for the fall and winter seasons. They were having fears to run out of food, safe shelter and other things during the winter time.

3. So, they explored, experimented and discovered a lot of things to survive and to have a better way of life. They tend to become more active by working very hard to prepare for the bad times.

So, it could be analyzed that those countries that were having limited resources were triggered to work harder and discover more things. Thus, there was progress. Being prepared really matters but they became prepared because it was a necessity.

Here’s an example, Scandinavian countries are very rich. However, if you will evaluate, their location is colder and there’s no enough sunshine. Some of these countries, the sun is always setting down and sometimes it’s not showing at all.

The location (Geography) where people live has a huge impact towards the growth and the prosperity of a certain race. This might not be the only factor for prosperity, but its influence is very strong. After all, it’s all about SURVIVAL. Human beings behave differently to their environment but the common denominator is always about survival.

So now, FEAR can make people strong. The fear of having a difficult life due to poor environment, limited resources, bad climate and other factors can push people to think more creatively and critically just to survive.

Thus, the story of HISTORY becomes more dramatic, bloody, funny, scary and violent because men from different parts of the globe interact differently to each other because all of them are having different experiences from where they live in.
Posted by Pauly Hart 0 comments

Another Alpha Game.
Another Success. 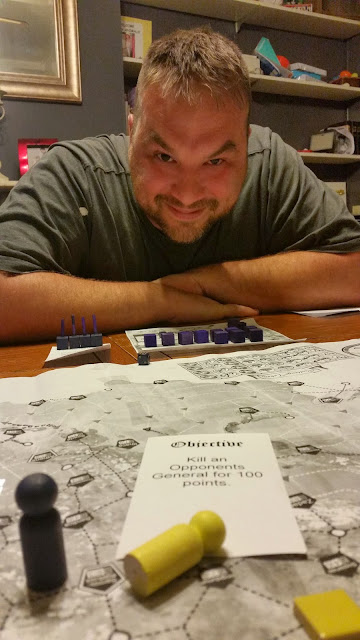 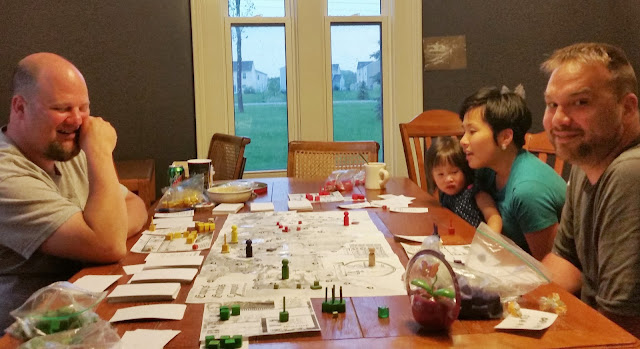 This should spice things up a bit.

He only costs six Florin! 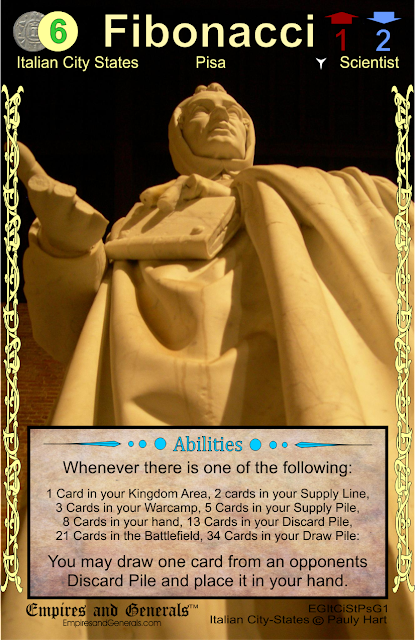 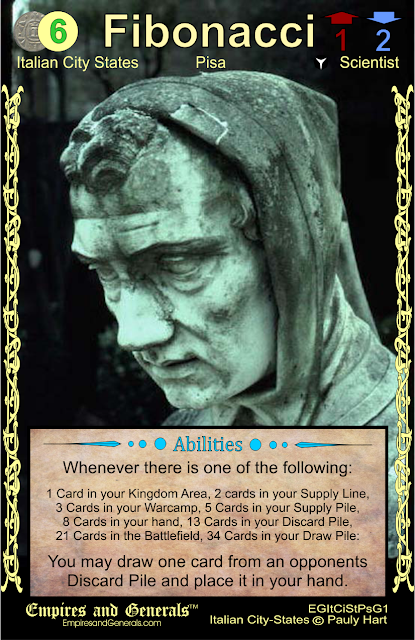 Coffee and Tea being served!

All of these fine beverages and beverage collectors and creators are now Trans-Dimensional, which means that you can play them in whatever age you are in.

Also, I have changed them from .jpg to .png - which is a little better. 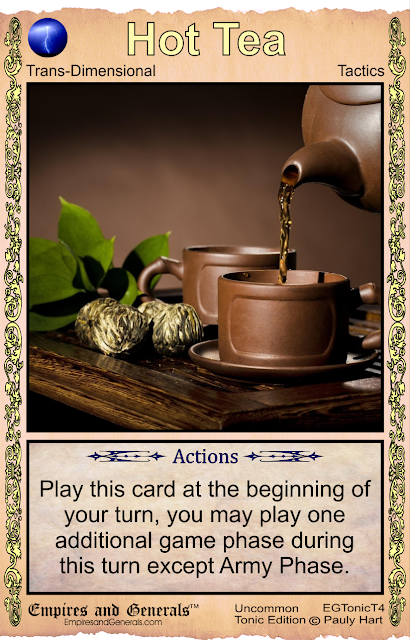 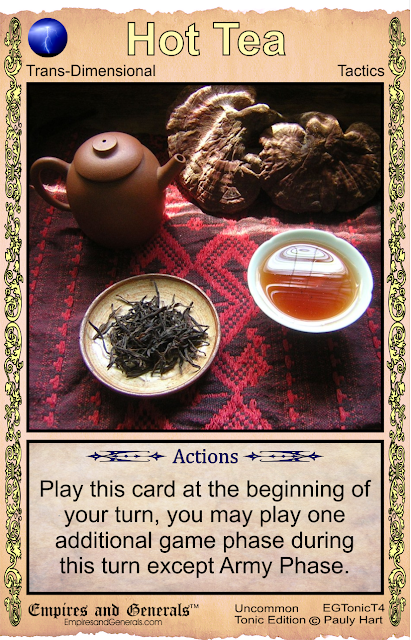 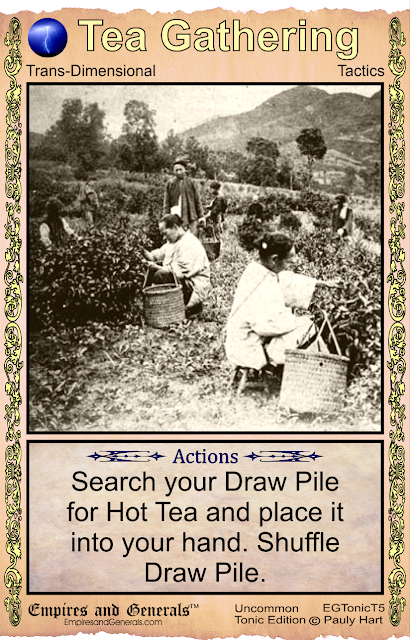 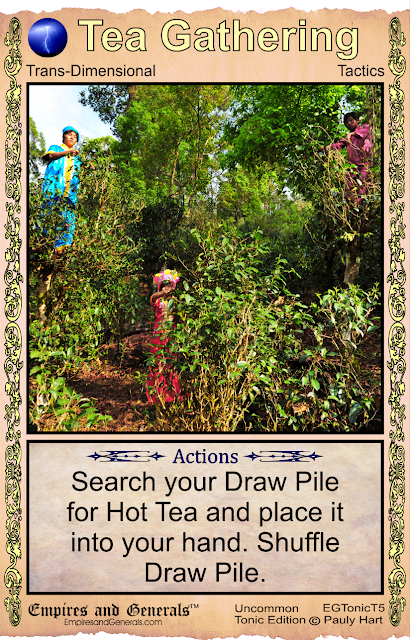 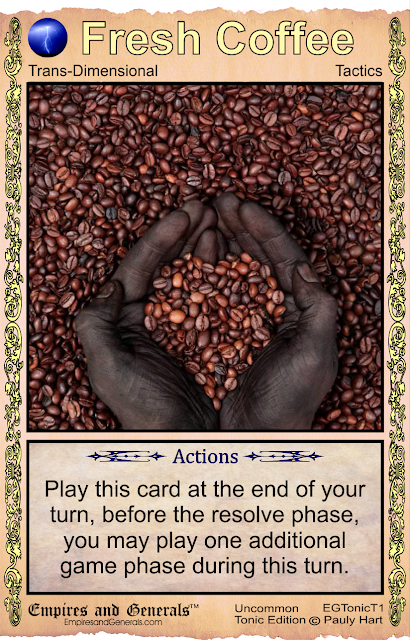 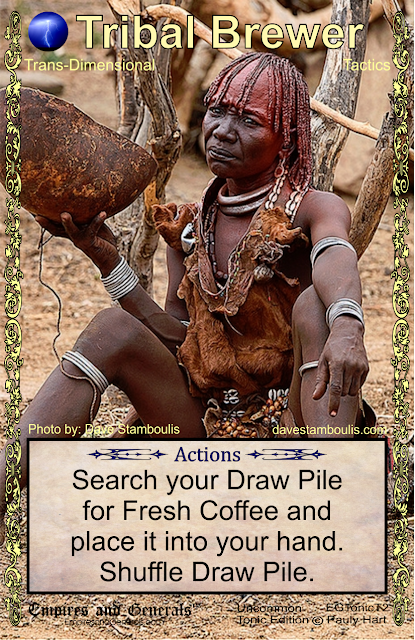 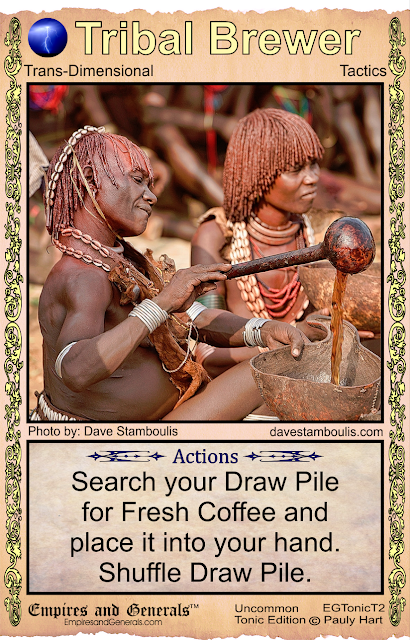 Working on a couple of things this morning.

Here is the first card of several thousand from the HARDBACK EDITION.

You can find more information about it here 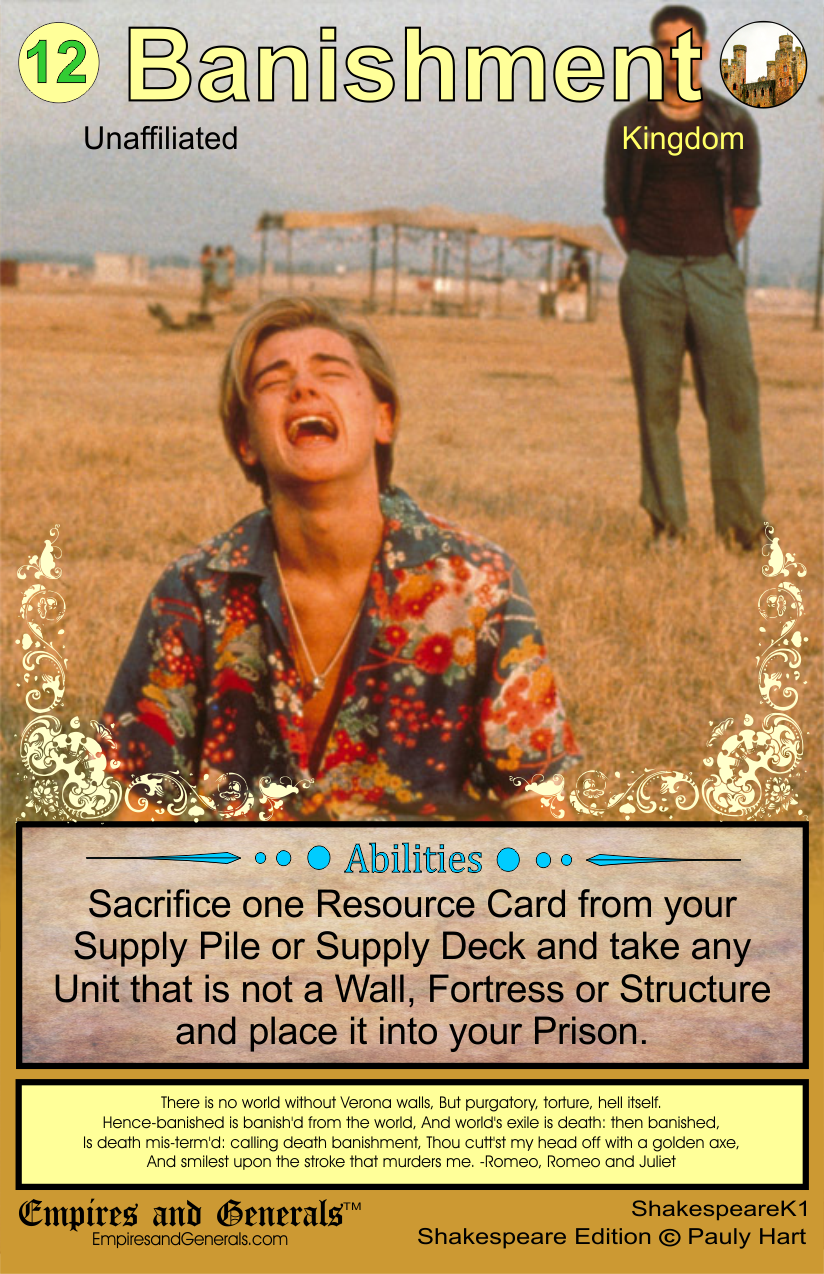 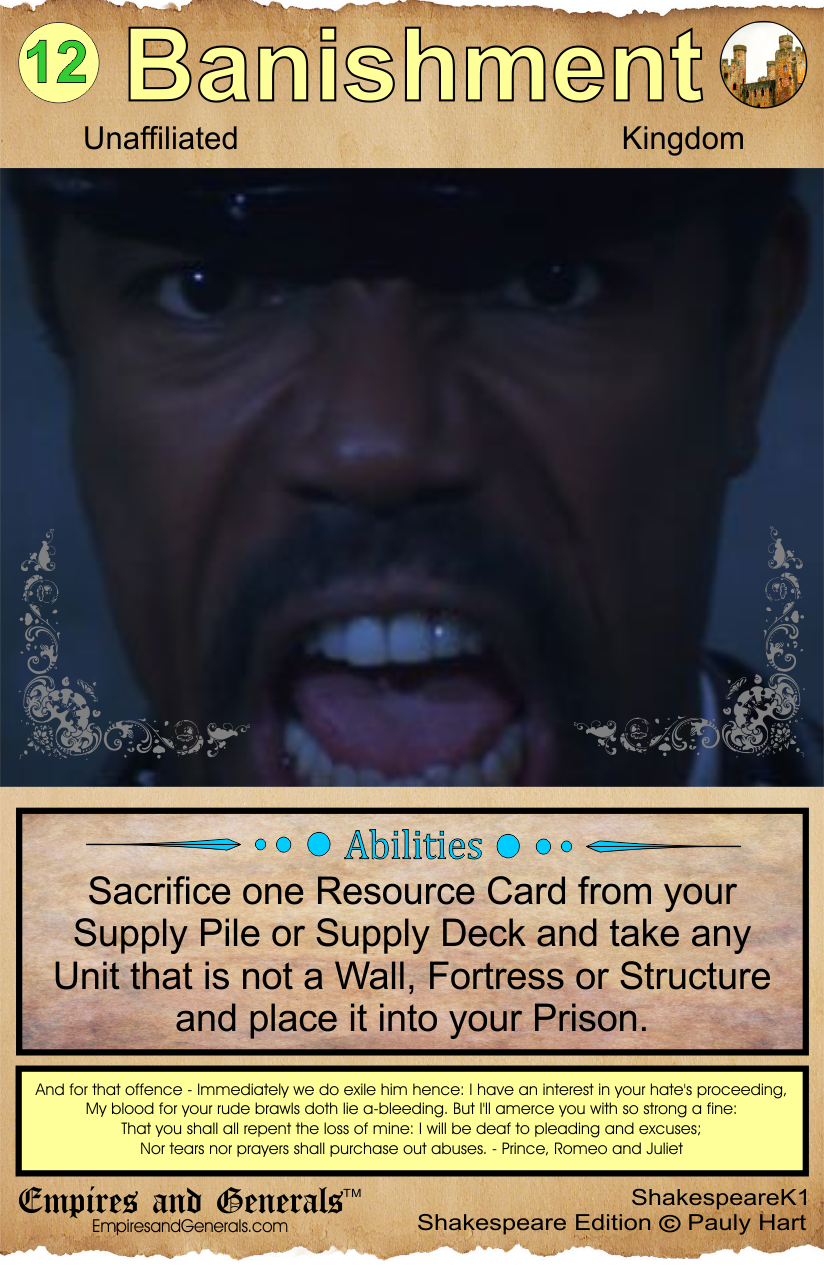