It occurred to me that without purchasing Persia or Greece, many people will not be able to play the kingdom cards with the COIN resource such as Michael, Samuel, Robert, Clayton or Paige.

So it's only fair that I give you a trader to play if you are still using the free version of the game.

How nice of us here at camp E&G.

And since the Garamantes were pretty big back in the day and I'm not going to have them in my game much, I figured that now was a great time to get them out there getting some action. 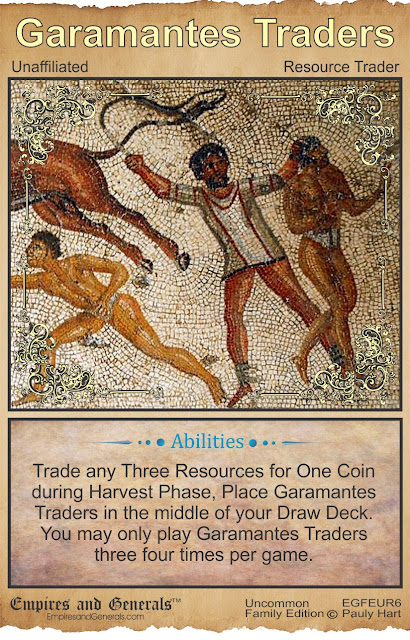 Many of you are not aware of the Facebook presence that we have.

I crack many an inside joke on the Facebook side that I don't post here. Not that Facebook is ALL THAT... It's just a little more personable is all.

Keeping the original costs and numbers, abilities and effects,
I have done a couple of things to better the cards as a whole.

RGB colors.
Flavor Text with website
Vibrant Colors for Cost, Strength and Life
Outlines for Effects and Abilities
Card Information at the bottom

You can also find them @ 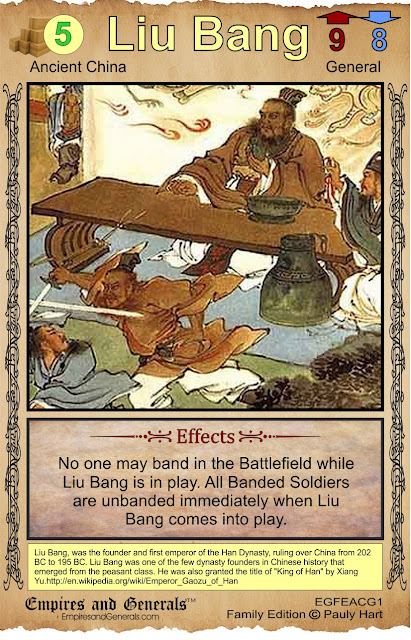 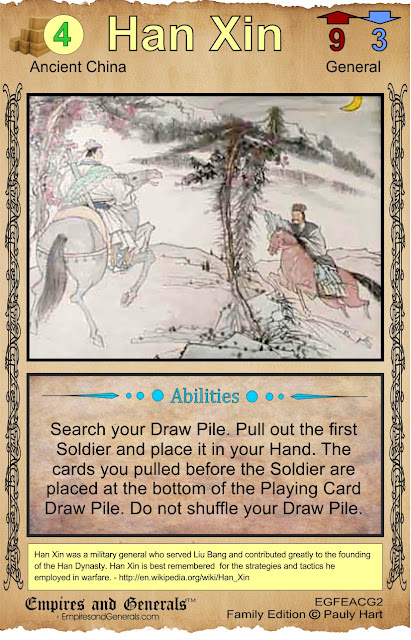 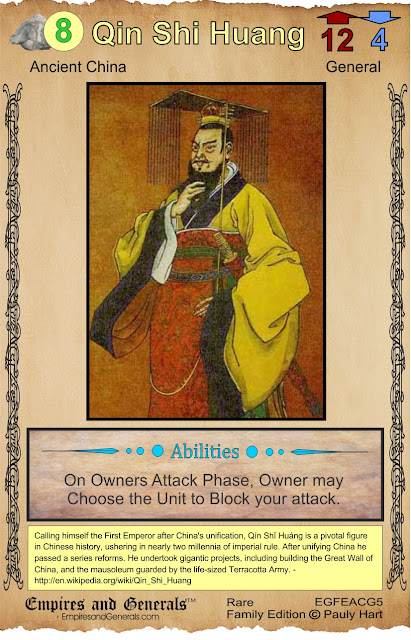 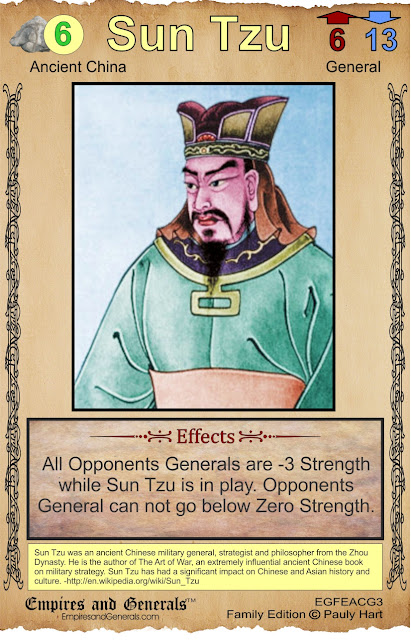 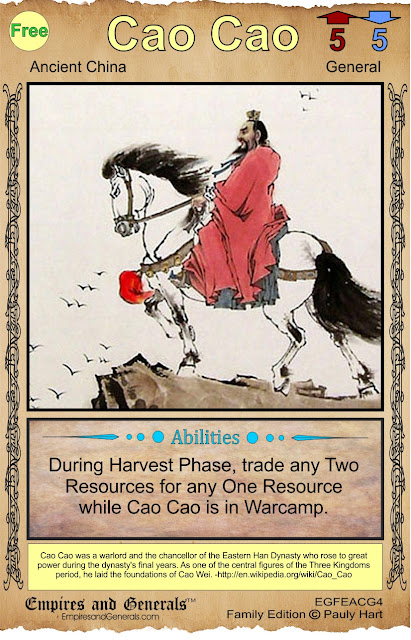 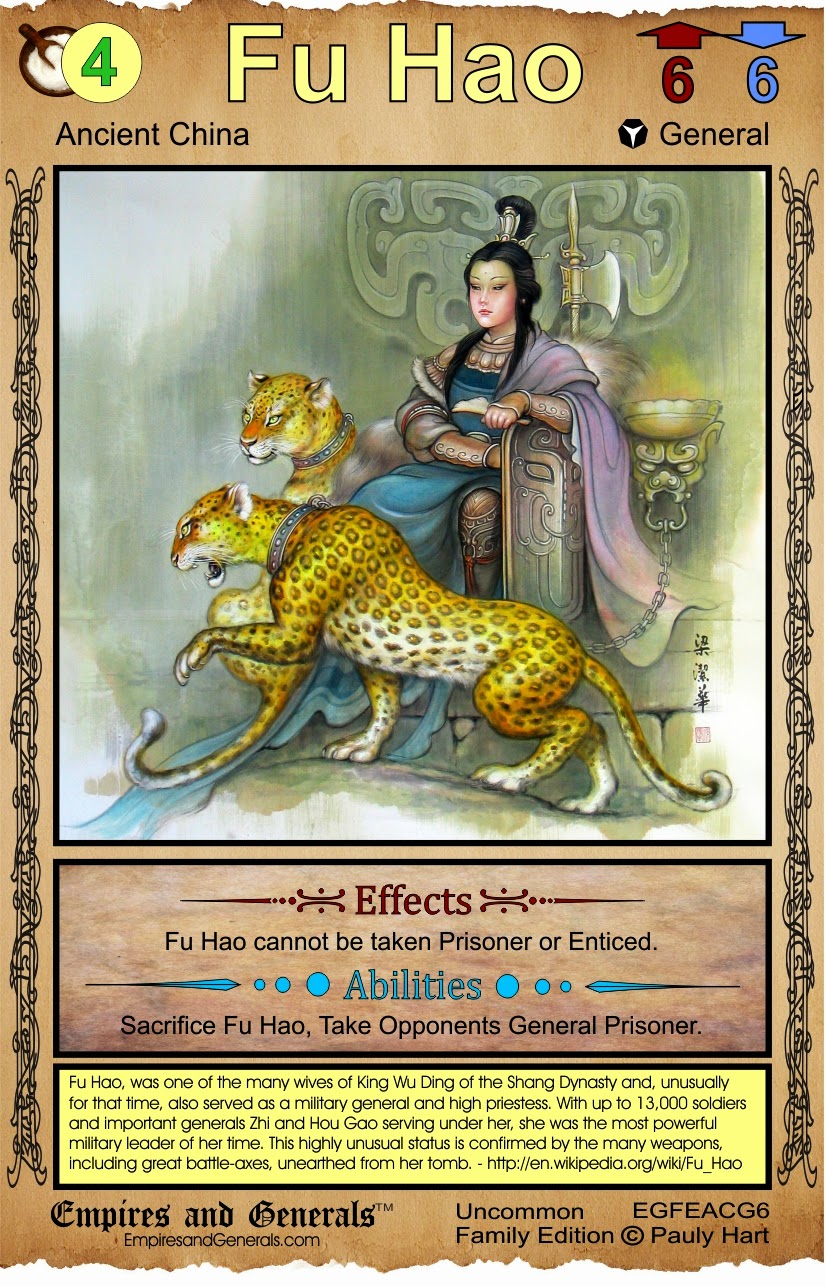 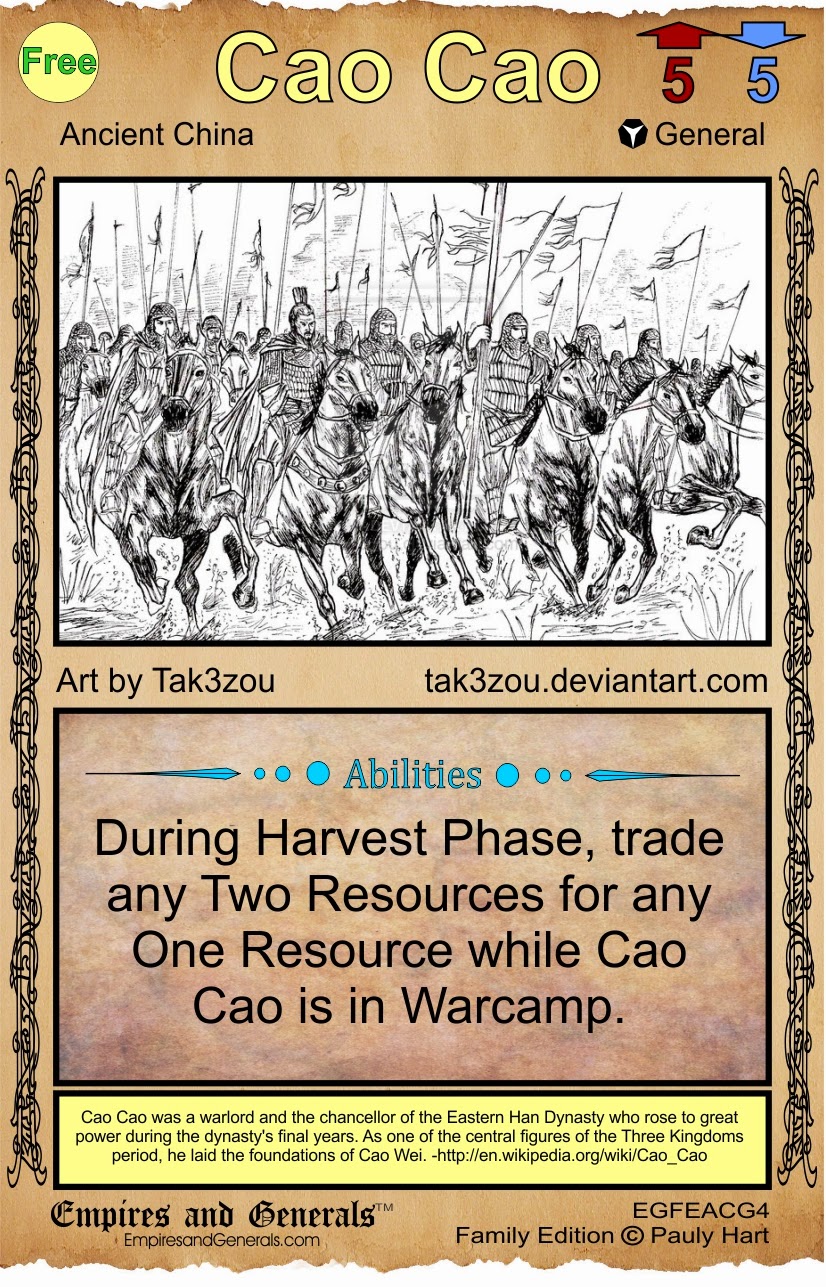 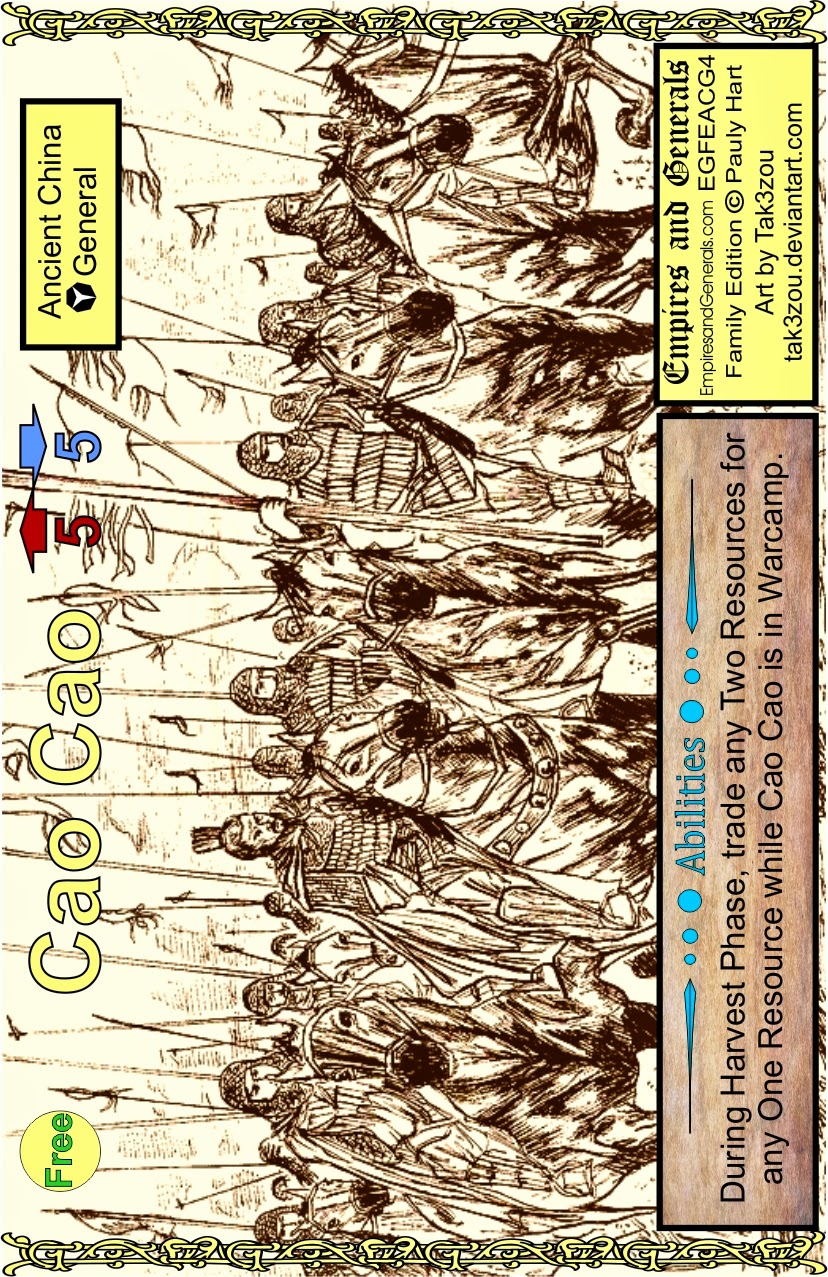 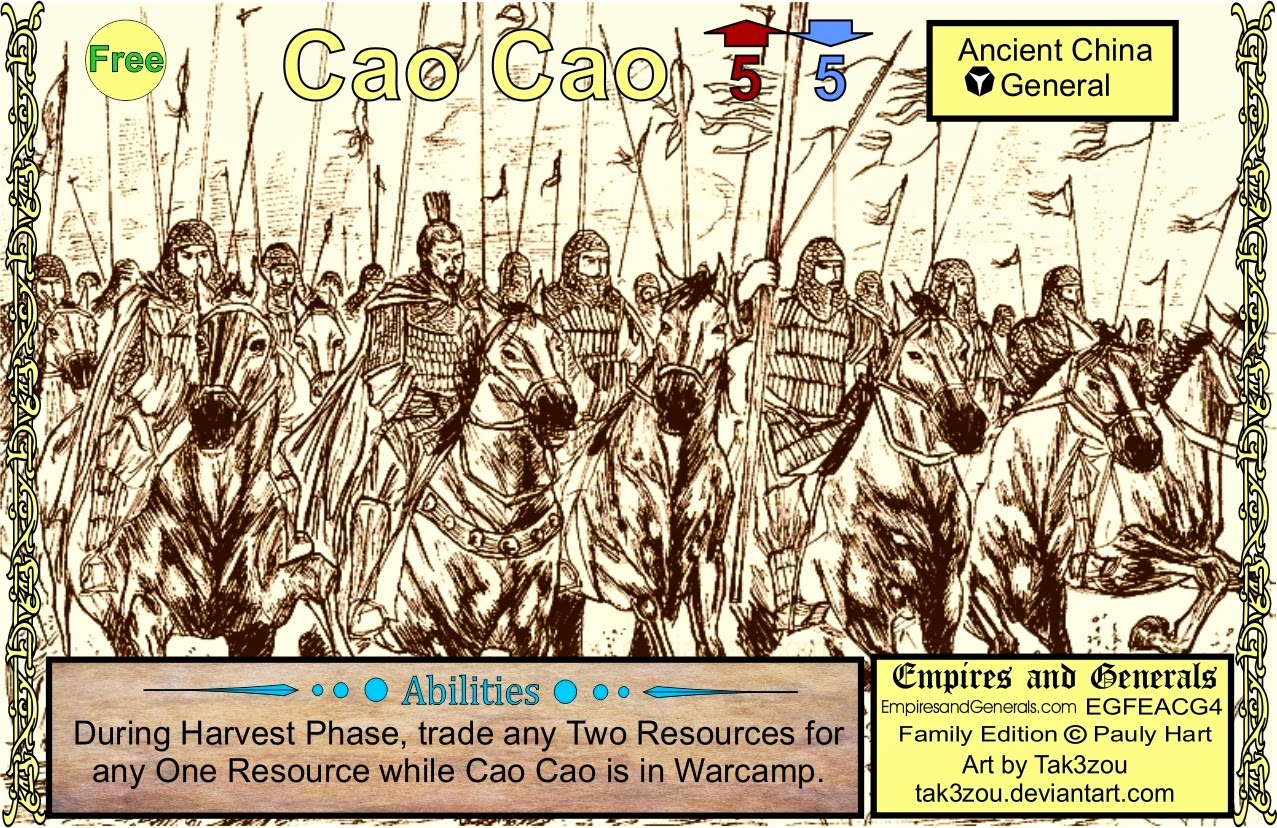 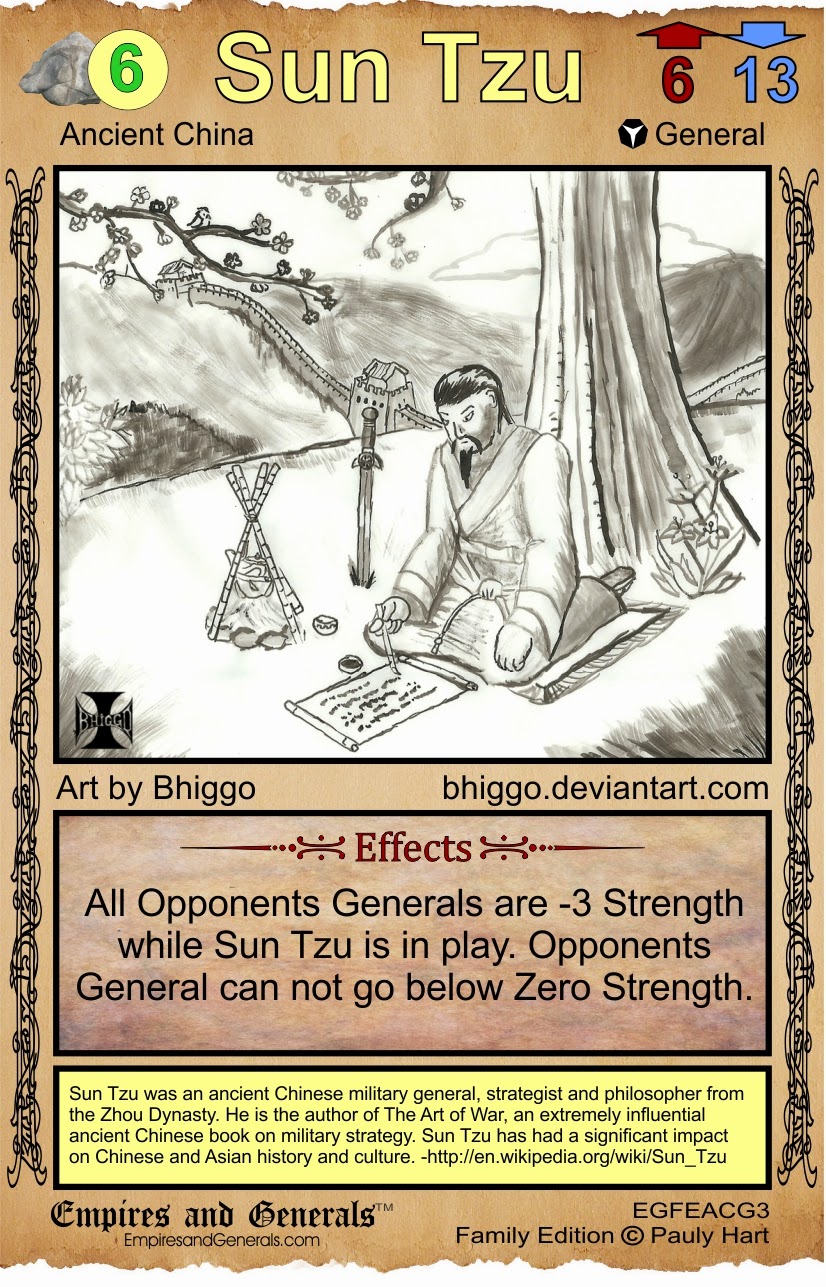 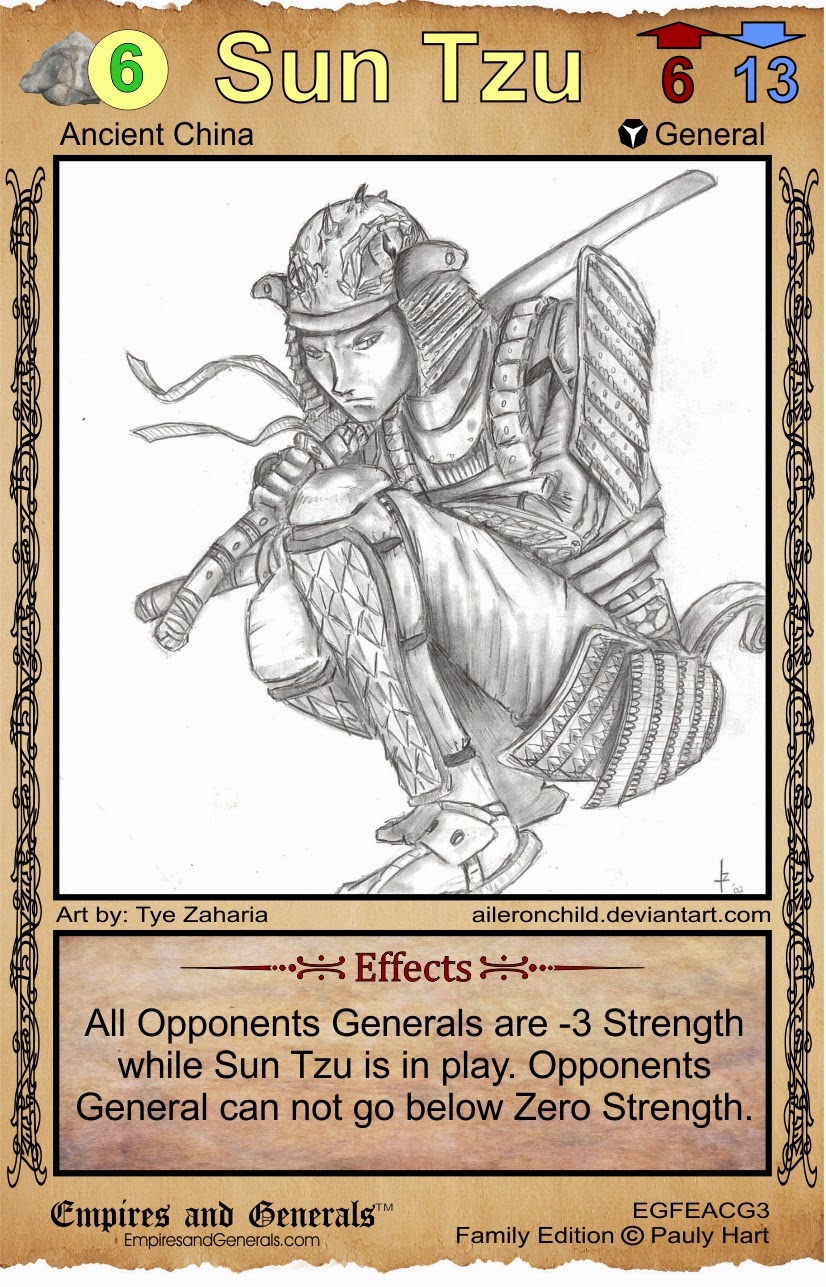 I will be working on the format of all of the existing cards moving them into the new look with the flavor text at the bottom.

The next card update will be the addition of new art into the pre-existing cards.

New software updates have made this possible by my new financial backer and we hope to bring you some exciting news soon.
Posted by Pauly Hart 0 comments

Three of the people that I work closely with at Sears are celebrating birthdays and marriages soon so I was figuring that I had this piece of art from Skvor, I would keep them together. the piece by itself is called "The Trio" and I wanted to include it because it is just pretty awesome.

Each Kingdom card costs two silver to play, but once you have them in play the Tactics card (a common card) is pretty beefy. The trick to doing this is pretty simple but difficult to execute since each Kingdom card is an ultra rare. If it were my deck, I would play them all at once so the other guy doesn't have a chance to play any of them. 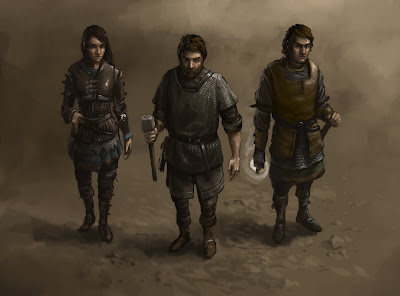 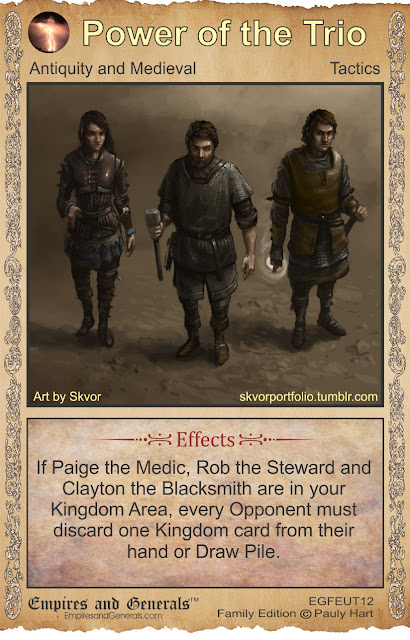 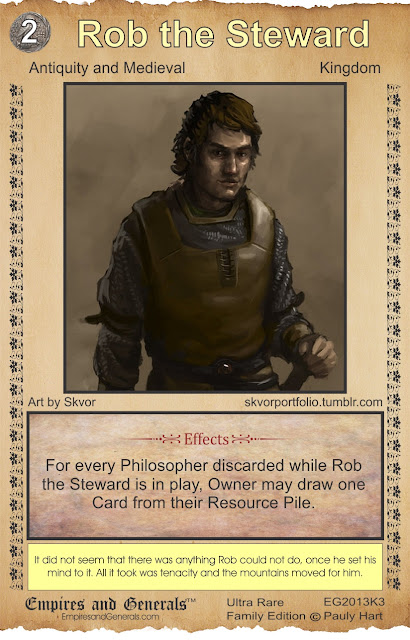 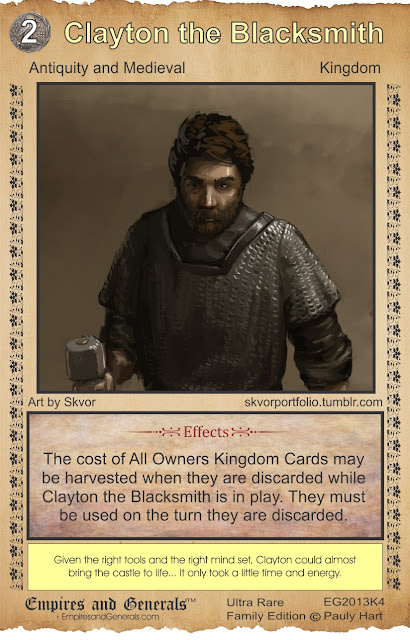 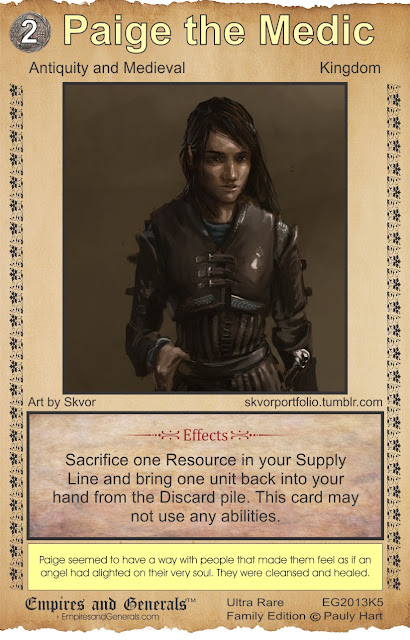 When the Texas Revolution broke out in 1835, Texas ponied up for a navy of its own after previously relying on privateers. The revolutionary government bought four schoooners: the Independence, the Brutus, the Liberty, and the Invincible. The mission of this, the First Texas Navy, was to defend the Texas coastline while punching through the Mexican blockade, and to inflict maximum damage on the Mexican navy. (The United States Navy seemed to find all of this a bit annoying, and had minor incidents with the two warring navies.) Though the Republic of Texas won independence after Sam Houston crushed Santa Anna at San Jacinto, cannons continued to thunder in the Gulf of Mexico well into the following year. Ultimately, the Texas fleet was lost.

The second Texas Navy set sail in 1839. Its first steamship-of-war was the Zavala, a two-hundred-foot passenger schooner purchased for $120,000 and refitted for maritime operations. While returning to Galveston following a campaign to help part of the Yucatan Peninsula rebel against Santa Ana, the Zavala was badly damaged in a storm. It made it back to port, but was never restored, and was eventually scuttled.

In 1996, the National Underwater and Marine Agency (which was once a fictional government organization featured in Clive Cussler’s novels, and later founded by Cussler as a real, non-profit organization) announced that it had discovered the Zavala at Bean’s Wharf, in Galveston. It was beneath a parking lot used by workers at a nearby grain elevator. There it remains, marked as a historic site by the Texas State Antiquities Commission.
Posted by Pauly Hart 0 comments

Would you like to draw 4 cards? I thought so. 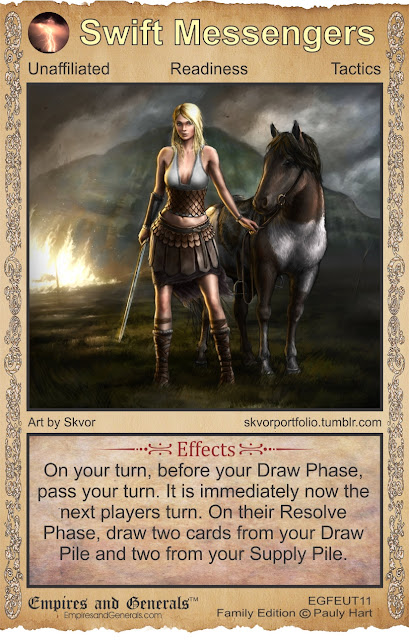 How to play in three minutes

Decide the Length and type of Game to play

Decide whether to Play or Pass

If you play, draw a card at the beginning of the turn

Harvest Resources (count how much you can spend each turn)

Play Kingdom and Strategy Cards if you have the resources

Play Soldiers and Units into the Warcamp

-You may move Soldiers to Battlefield on their next turn

Attack with one Unit, Soldier or General

-Use the Attack Resolution Card to determine outcome of battle

Pass the turn to the next player

software updates are on the way!
Posted by Pauly Hart 0 comments