recently I have begun playing a facebook game called game of thrones ascent.

it's pretty neat but every now and again they throw something bogus in it because they run out of words maybe? i don't know...

recently i won the "Rare Prowlers's Seal of Questing"... and i looked at my wife and i said: "what the heck is a rare prowlers's seal of questing? can i eat it or can i sew it on my sleeve?" 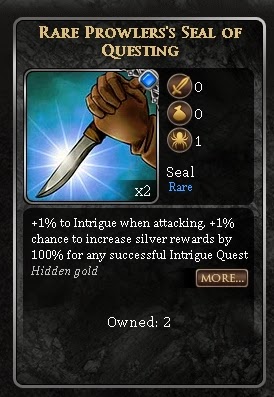 i mean it's a seal so that tells me in the game that i can use it as a stamp when i make a wax blob over my parchment... but i kinda already own four of those plus my personal seal...

won't people become confused with who i am if i keep sealing things with different stamps?

the makers of this game...

i promise i will never do something this stupid.

you can always email me at empiresandgenerals@gmail.com and let me know how i'm doing.