"After months of secret digging, antiquity officials in Peru announced Thursday the discovery of an ancient tomb filled with golden treasure, three queens and the servants who accompanied them into the afterlife some 1,200 years ago.

Called El Castillo de Huarmey, (the Castle on the River Huarmey) the stepped pyramid mausoleum on the coast of southern Peru has been dubbed the "Temple of the Dead" by the National Geographic Society-funded research team led by Milosz Giersz of Poland's University of Warsaw. Discovery of the rare unlooted tomb by the Peruvian-Polish team makes clear that the ancient Wari were rulers of southern Peru before 1000 A.D. and the advent of the Inca Empire." - USA Today

So, in light of all of that, I made this fun card. Not really any value, just a time waster, but I thought it was interesting if there was some kind of ritual suicide pact with four people and they all drank the Peruvian Kool-Aid. Pure speculation of course, but then, why do you want a dudes face four times on your cup? Maybe it was like the four guys that you just killed and they were collectors items... 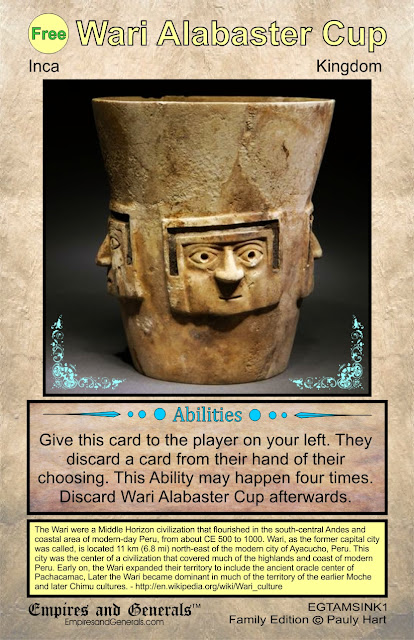