Laughing in the face of history - The Independent California Republic 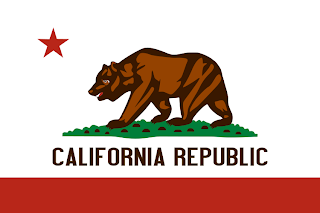 In the spring of 1846, the American army officer and explorer John C. Fremont arrived at Sutter's Fort (near modern-day Sacramento) with a small corps of soldiers. Whether or not Fremont had been specifically ordered to encourage an American rebellion is unclear. Ostensibly, he and his men were in the area strictly for the purposes of making a scientific survey. However, the brash young officer began to persuade a motley mix of American settlers and adventurers to form militias and prepare for a rebellion against Mexico.

Emboldened by Fremont's encouragement, on June 14, 1846, a party of more than 30 Americans under the leadership of William Ide and Ezekiel Merritt invaded the largely defenseless Mexican outpost of Sonoma just north of San Francisco. Fremont and his soldiers did not participate, though he had given his tacit approval of the attack. Merritt and his men surrounded the home of the retired Mexican general Mariano Vallejo and informed him that he was a prisoner of war. Vallejo, who was actually a supporter of American annexation, was more puzzled than alarmed by the rebels. He invited Merritt and a few of the other men into his home to discuss the situation over drinks. After several hours passed, Ide went in and spoiled what had turned into pleasant chat by arresting Vallejo and his family.

Having won a bloodless victory at Sonoma, Ide and Merritt then proceeded to declare California an independent republic. With a cotton sheet and some red paint, they constructed a makeshift flag with a crude drawing of a grizzly bear, a lone red star (a reference to the earlier Lone Star Republic of Texas) and the words "California Republic" at the bottom. From then on, the independence movement was known as the Bear Flag Revolt.

After the rebels won a few minor skirmishes with Mexican forces, Fremont officially took command of the so-called Bear Flaggers and occupied the unguarded presidio of San Francisco on July 1. Six days later, Fremont learned that American forces under Commodore John D. Sloat had taken Monterey without a fight and officially raised the American flag over California. (The United States had declared war against Mexico on May 13, 1846. This news apparently had not reached the Bear Flaggers at the time of their revolt.) Since the ultimate goal of the Bear Flaggers was to make California part of the United States, they now saw little reason to preserve their "government." Three weeks after it had been proclaimed, the California Republic quietly faded away.

But the flag is STILL the flag of California.
Posted by Pauly Hart