Laughing in the face of history - Republic of Transylvania 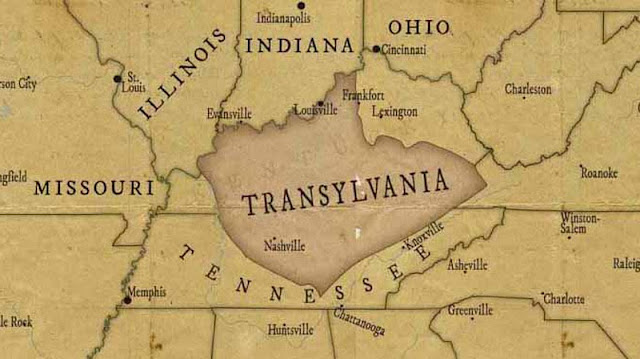 I am a member of this land. Not a former slave, not a Native Aboriginal, but mostly white in skin. As a genetic descendant of England, France and Israel, it is rare that I would be a member of this land here in the North-West Continent of the Globe. But here it is. My extended family has roots in legitimate ownership of land in the United States.

It all happened when some of my ancestors decided to hang out with Daniel Boone and help form the Republic of Transylvania. We did it legally and without force, taking over no ones homes and displacing no one. The Iroquois helped sell the land to us for the Shawnee, who had given up on the area. The area was all the land lying between the Cumberland River, the Cumberland Mountains, and the Kentucky River, and situated south of the Ohio River which was around 20 million acres.

Daniel Boone and several others make a sovereign and legal country west of the existing United States. They purchase it legally from the owners contractors with their consent. The United States steals it and rips up the contract.

The United States at this time in its history - Exercised imminent domain strategies. Voided contracts when they saw fit. Ignored the wishes of the Native Aboriginals. Did whatever they wanted...

I am glad they changed their ways.

You can read some more on the wikipedia article that is mostly accurate.
Posted by Pauly Hart