Because it's one of the most important aspects of my game, you might find yourself cursing your luck as you fail to have a pen and paper or monumentally fail to have a quarter or a penny or a mite in your pocket. But BEHOLD! I bring you good tidings of new cards.

A Counter card. NOT a counter-card... that would be a match or a shredder or something... but a CARD that is a counter for some kind of Effect, Ability or Action that is happening in the Battlefield or rather anywhere in play.

A Counter Card doesn't sit in your Draw Pile or your Supply Pile, you just keep them with your Reference Cards for the time being.

In delving deep into this abyss of "part-time cards" one would suppose that just about everything in the game would need a Counter at one point or another. But since (at the time of this post) there is really only one card that requires you to flip it over to activate it, I only made the one card.

It's a great game mechanic though. Flip the card over and it becomes X or whatever. So, it stays in the game for now.

And so that brings us to our first Roman Republic Strategy Card that almost requires Counters: War Engine Design 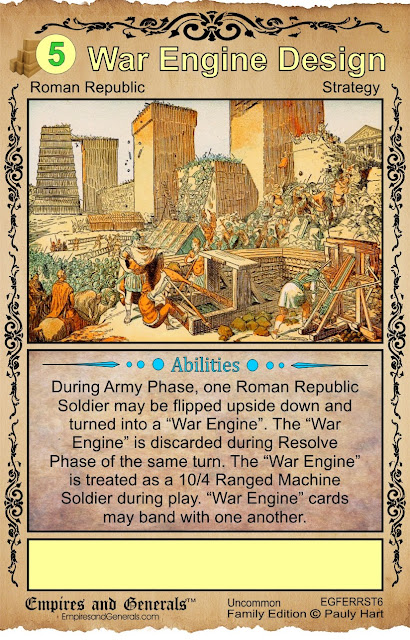 During Army phase: Flip a card.

And it's something else... Well it's a lot to take in at one glance (without a lot of flipping back and forth) so, here is the ease-in-effect card to place over it (at no cost obviously) when it is flipped. 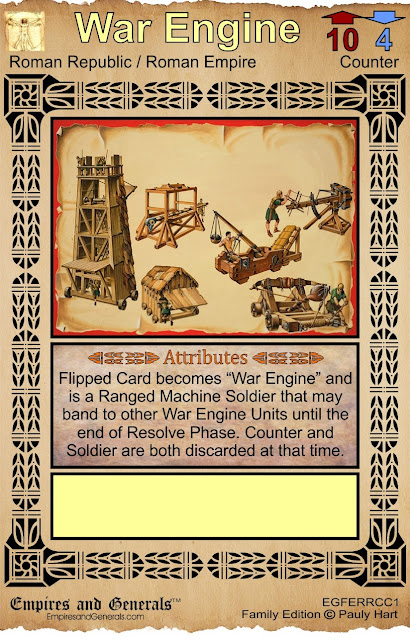 The upper left logo is the Vitruvian Man by Leonardo Da Vinci.
The Action/Effect/Ability from the other card gives us an "Attribute" on this card.
This card shows a dual Empire.
It's card type is a counter.
The Card ID features a CC at the end and that stands for Counter Card.
And a really cool border and a nice picture. Maybe better/cooler pictures to come.

Enjoy the new card type as I am sure that many people will now build a War Engine Deck. It's uncommon though but I am sure that with a Hun or Egyptian low-cost soldier strategy, one could make it work.